Last post I shared that the kids and I were heading on vacation. I feel like we’ve been gone a lot longer than we were. The kids and I headed to Gulf Shores, Alabama to visit family. Now, I had no idea where Gulf Shores was or that it was such an amazing place to go. If you ever get the chance to visit Gulf Shores, I highly recommend it. Just a fair warning though, July and August will melt your skin.

We left July 3. We woke at the break of dawn, you know, the time of day when the rest of the normal world is sleeping? Yes, that time. I was so excited that I think I got three hours of sleep. The kids may have gotten four. I’m not even sure who was more excited. My heart leapt every time I thought about them flying and experiencing this with me. How lucky am I?

The drive to the airport was a pretty awesome feeling. It almost felt like I was about to meet my unborn child for the first time. That much excitement. We’ve been waiting a long time to be able to travel like this and here the day was!!!

The kids loved rolling their suitcases like big people do. The airport was quiet and bright. I’m thankful for our uneventful airport!

While sitting there our planes flight crew came and gave the kids their wings! The kids thought that was super cool! 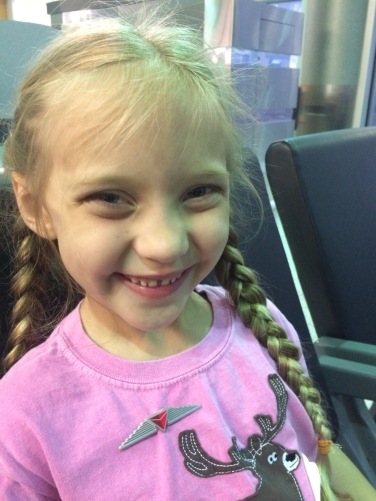 Once we boarded the plane I spoke to the flight attendant and mentioned that this was the kids first time flying! They received a little keepsake certificate signed by the pilot and attendants.

Trying to get luggage and back packs aboard these tiny planes was fun. I think the rows get smaller and smaller each time I fly. It’s definitely not me overstuffing the luggage! 😉

I remember looking at my kids while they watched out the window at take off. My heart was amazingly happy. Holding Tootie’s hand, them in their happy places, full of excitement. What a moment! We ended up with a connecting flight, that was the moment that it all hit Tootie. She was out! ❤ 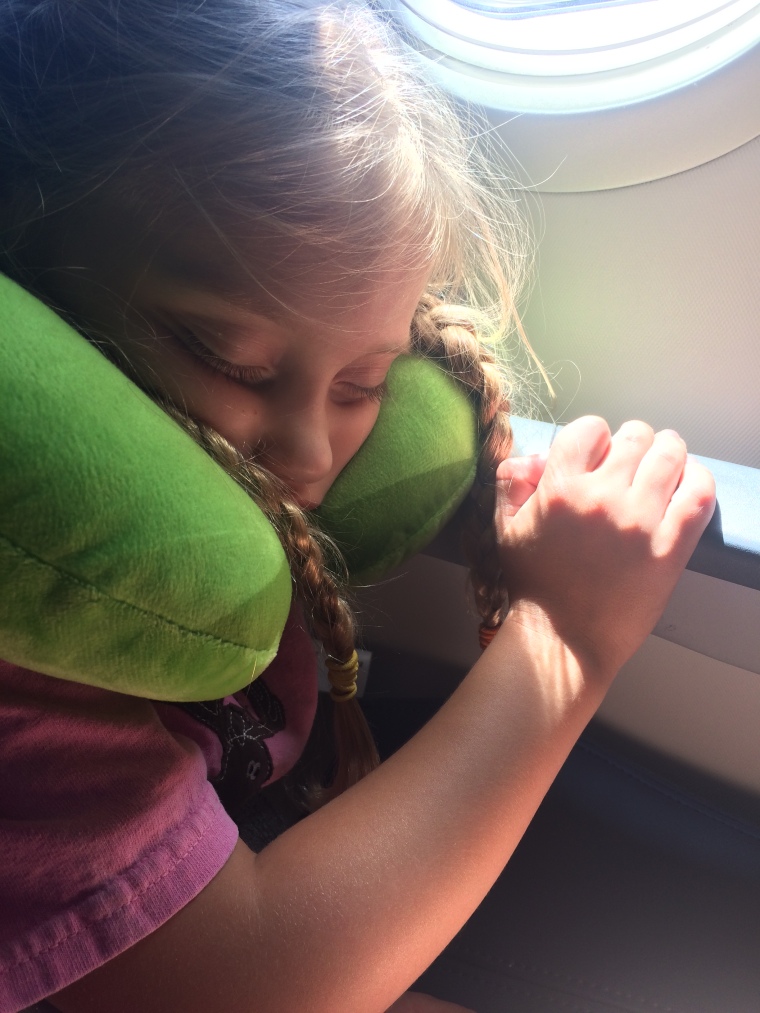 We flew into Pensacola, Florida. There is a little hidden gem of a place called Uncle Sandy’s Macaw Bird Park. What a fun little place! You buy a bucket of food and walk around and hand feed all the birds!!! The office pet was a very vocal but friendly critter that loved to be held. The kids LOVED feeding the birds and the worker lady was so very friendly! 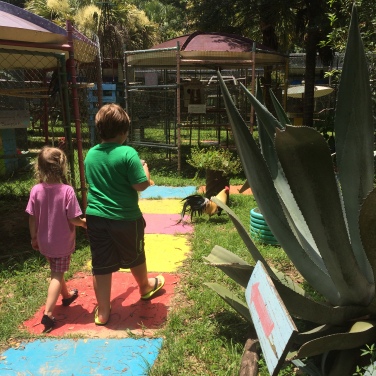 After the bird sanctuary it was about all we could handle for the rest of the day. Tootie passed out on the couch and Heater he chilled playing the iPad. We had supper and pretty much called it a day!

The next day was the 4th of July! I’ve never celebrated the 4th out of state before and I was told that Gulf Shores had a fantastic 4th celebration! We kicked off our day at a place called Lickin’ Good Donuts. Let’s just say, “Oh-Em-Gee!”. I ate so many donuts in one sitting I was literally in a donut coma. OK, not that bad, but it was tough to move after. I sorta waddled from then on out. They have donuts similar to Kwik Trips glazer donuts. But there’s this little bit of heaven donut. The Maple Bacon donut. I’m not one for bacon on many of my things, but this… this will do!

My cousin kept laughing at how many pictures I took. But never mind her :P. I took pictures of just about everything. Here’s a couple silly ones from their souvenir shops in the city. Glad the shark didn’t eat my children! 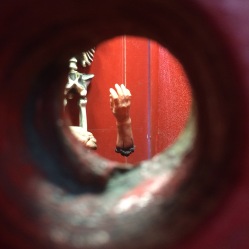 Our vacation really began with the Pirate Cruise. The kids had water fights, sword fights, limbo, treasure hunting, face painting, and pirate trickery! This was high on my list of favorites! 2.5 hours of pure fun in the sun, Pirate Style! 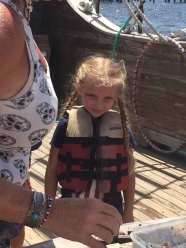 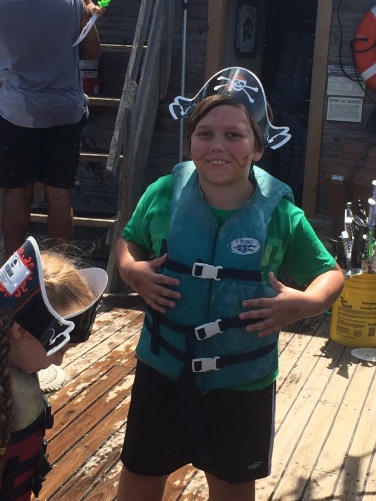 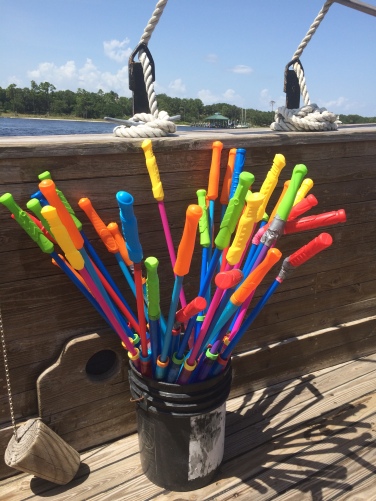 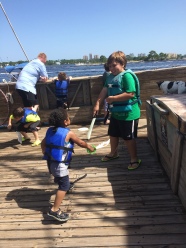 There’s one thing I couldn’t agree more with, once you find your feet in white sand, ocean water and the summer sun, you’re just not the same anymore. We gathered at the beach near Gulf Shores Pier Park. Just when you think you’ve had an awesome Independence Day celebration, you find this one takes the cake! My kids and I were in the ocean until the fireworks began. Like 9:00pm!!! It was insane. Crazy good insane. The beach was beautiful at night. And the pictures of the fireworks really don’t do any justice at all, but I had to share.

we washed out sand for DAYS! 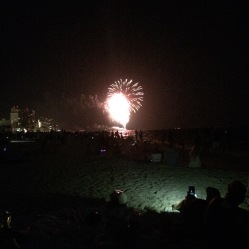 If you’re even semi interested in Alligators, Alligator Alley is the place for you to go. Watch them get fed, hold a baby alligator, you can feed the littles and the bigs and walk above them on a wooden boardwalk! Some were quite small and some I’m glad were fenced in!! 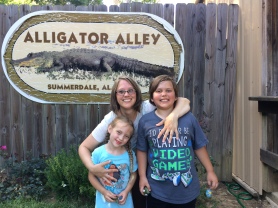 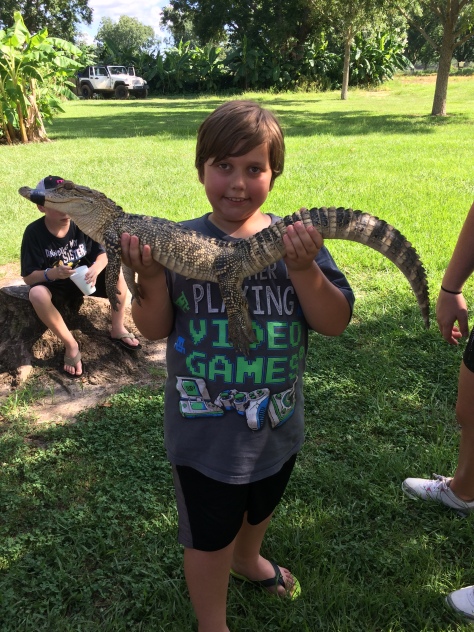 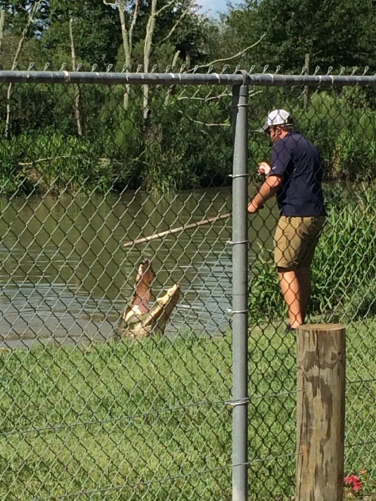 So, my brightest moment was when I scheduled a beach and sand dune excursion at Dauphin Island Sea Lab. I had the best of intentions. I figured here’s the perfect opportunity to learn while on vacation. Sand dunes, maritime forest, and the beach! Had it not been feeling like 108 degrees outside, I truly believe we all would have loved it more. It was so hot and starting out going through the forest, it was just so hot. I managed to take photos though, and I’m so glad I did, because I can’t remember a word the leader was saying. The beach was amazing, mostly because it was something to cool us off. Well, for me. The kids had a blast looking for and finding ghost crabs and hermit crabs. Besides the melting heat we really did enjoy it. 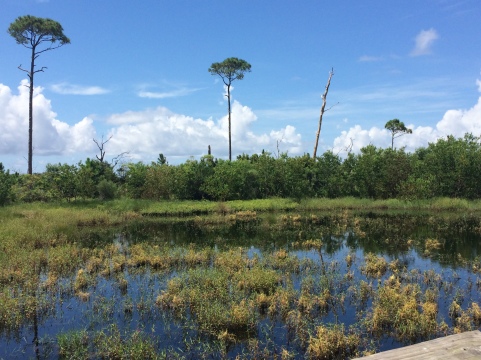 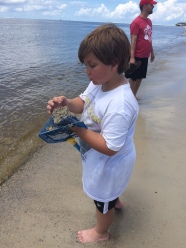 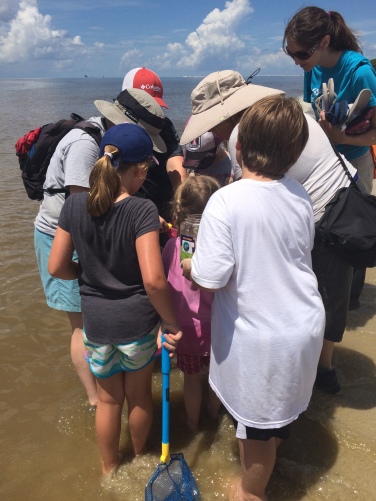 I think the kids had the most fun ghost crab hunting. We found a ton back at the Pier (again).  They are quick buggers, otherwise I would have tried to take a picture. Imagine sand colored crabs the size of silver dollars, with black beady eyes and quick as lightning. That’s a ghost crab. 😀 Plus more beach time, who can pass that up?? 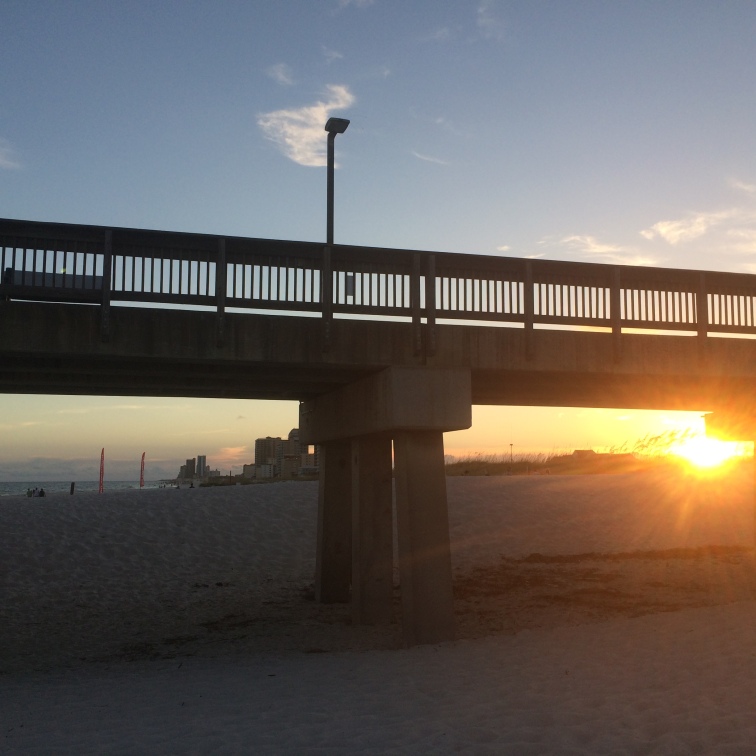 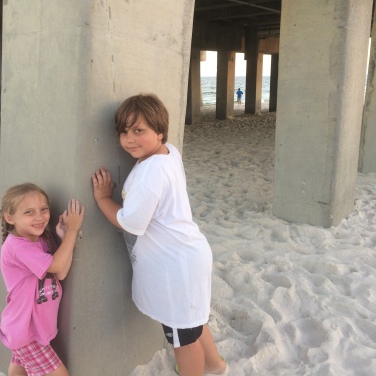 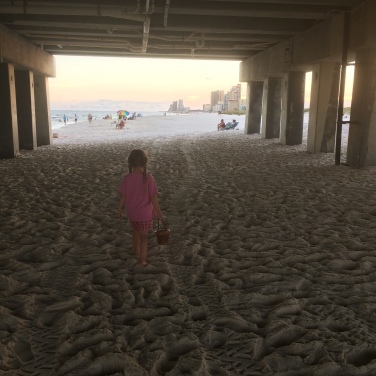 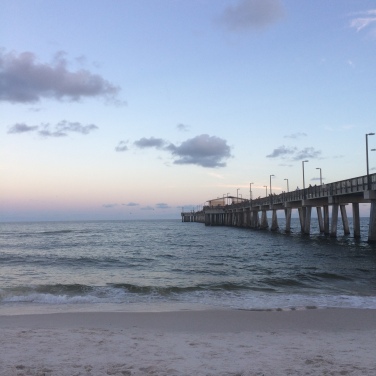 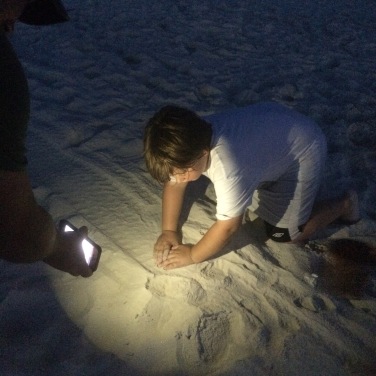 We did a lot of driving, and Tootie zonked out quite a bit. Heater was the pillow. He’s such a character! 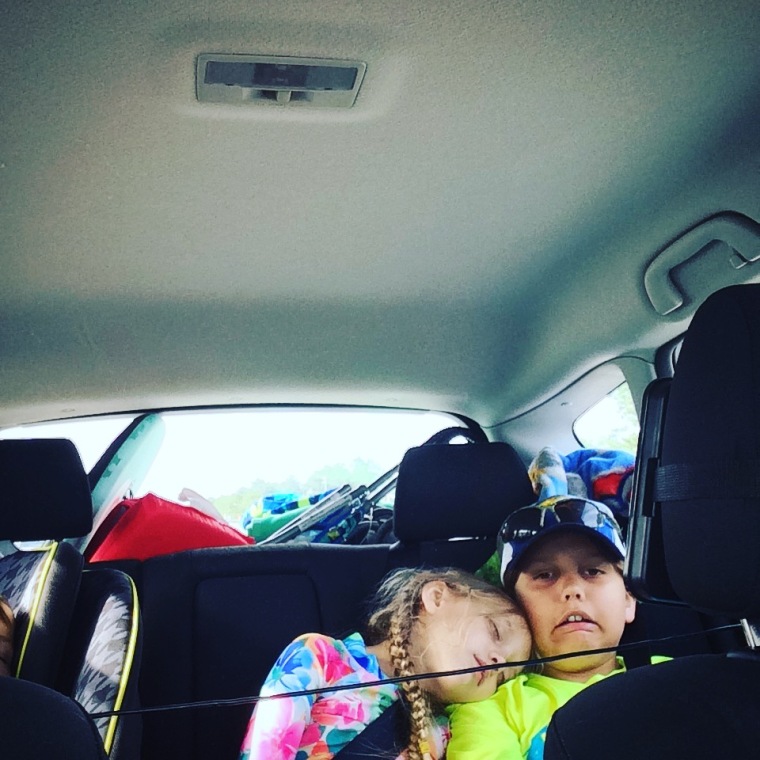 Another really fun and kid friendly place is The Hangout. They had sooooo much stuff to do for the kids. A sand hill, bungee bouncing, foam party, food, and more! 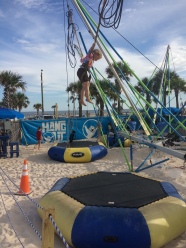 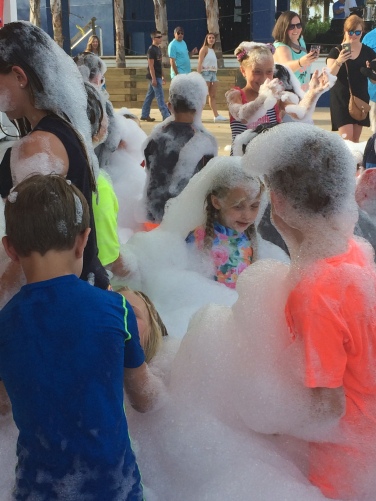 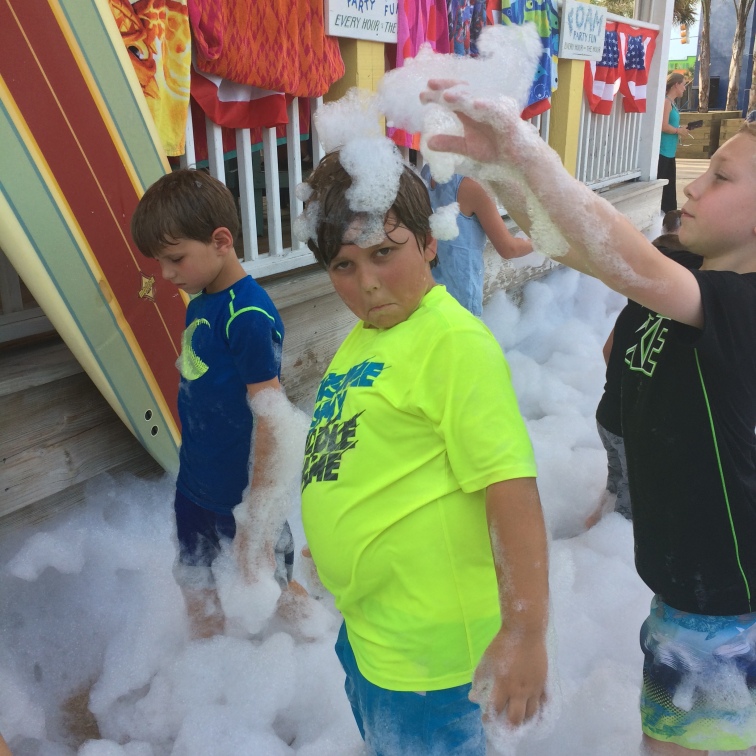 We also tried Lulu’s. Lucy Buffet’s restaurant. This was much like The Hangout. It had an arcade, rope courses and water walkers. Tootie tried both, while Heater just did the water walker. I’d say they enjoyed it!!! 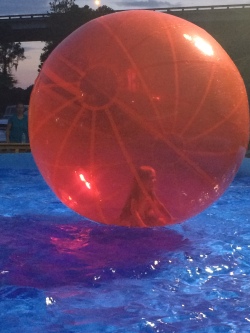 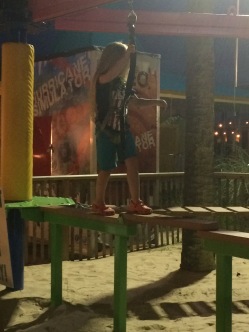 I’m telling you The Pier is the place to be. You can swim, collect shells, crab hunt, body surf, and fish. We wanted to try our luck at fishing seeing we heard you can catch amazing fish there. I caught a Flounder!!! I had no idea it was on my line, but lo and behold, I wasn’t skunked fishing! Ha! Take that, Dad! We also saw a sting ray and some blue crabs! We were pretty high up on the Pier so can you imagine just how big these babies were? And to think we swam in that water! LOL.

One thing I’ll never tire of is having my babies near me. They bring out the silly and so much love! Look at these faces!!! 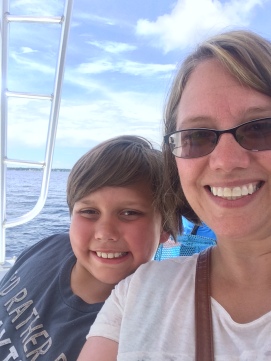 A vacation isn’t complete until you’ve done the Dolphin Cruise. We held it until the last part of our trip, just incase it didn’t make the cut. Man, am I glad we did it! It was AMAZING! Two boats go out and search for dolphins, once found they join side by side and the dolphins “hitch a ride” and play! 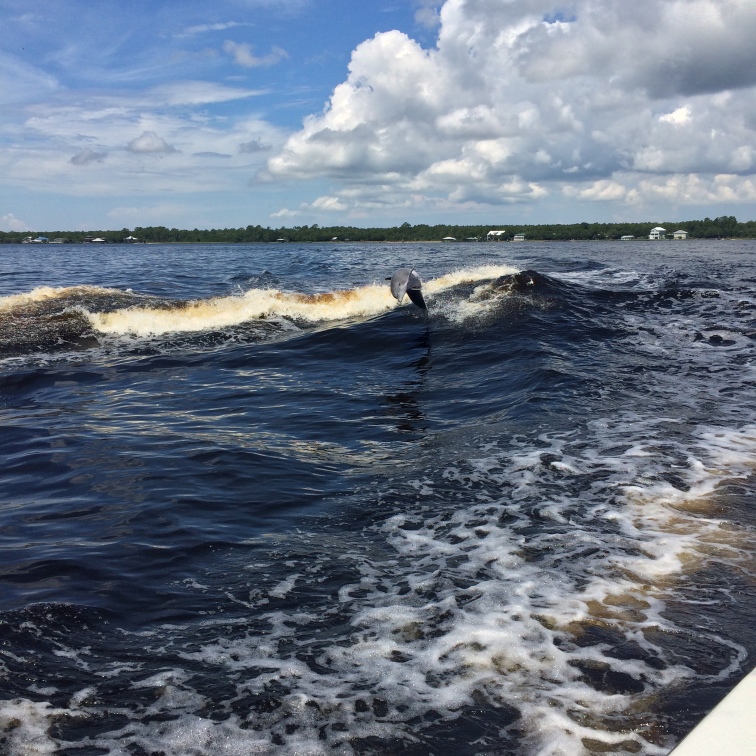 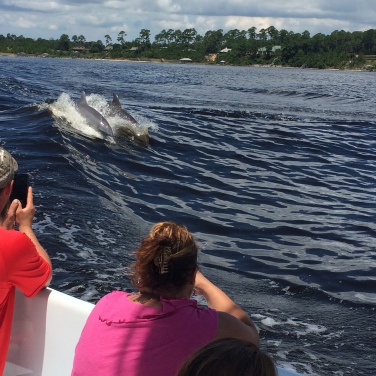 Our vacation was simply amazing. It was a moment to sit back (not really, we were so busy) and just be. I knew whatever we left back at home would be there when we returned (I did worry about my vehicle at the airport, but, it was still there). We’ve done the weekend getaway, the day trips here or there, but this, this so far was my favorite. I’m so blessed. I’ve waited a long time to do something this magical with my kids. They deserved it so. I want them to see just how spectacular our world really is and cannot wait to show them more of it!